Since this solar placement is so important we thought it would be a great idea to write a complete article about this topic. So please read the information down below as it can help you tremendously and ultimately save you money in the long run.

As we mentioned above solar panel placement is a huge factor that determines how much energy your solar system produces. This placement is composed of two separate factors, the direction and the angle that the solar panels are situated at. By getting these two factors right you can set up your solar panels for a lifetime of success.

In most cases the best direction for solar panels is to be facing south. This is true for anyone who lives in the United States or anywhere else in the Northern Hemisphere.

This means that solar panels facing south will receive more sunlight through out the year then in any other direction available. 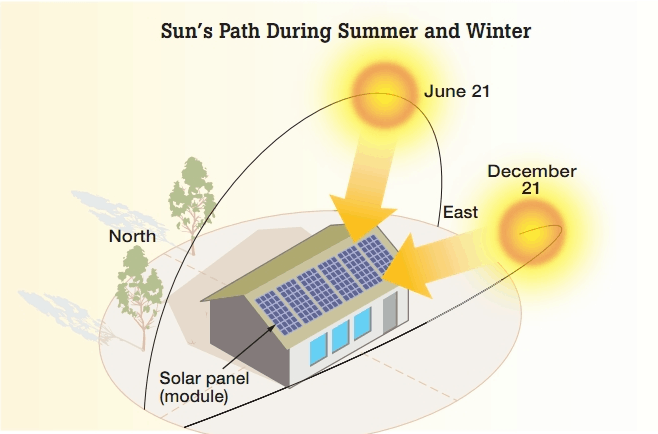 With that being said what if you don’t have a roof top that faces south. Should you just not buy solar panels?

Another thing to keep in mind is that you will have two peak production times if you install your solar panels on both west/east roof faces. Your east-facing solar panels would max out in the morning (since the sun rises in the east) and your west-facing solar panels would max out in late afternoon (since the sun sets in the west). If you only installed the panels on a southern facing roof then you will only one peak production time at around noon.

As we mentioned above the angle in which the solar panels are installed at is also very important. In most cases professional solar installers will line the panels at the same angle as your roof top. This is usually a better option as it gives you a more secure installation and is also more cost-effective.

On the other hand if you are able to set the angle of the panels then 30 to 45 degrees is the best fixed angle. This will allow the solar panels to get the most amount of direct sunlight and convert it more efficiently. If you want exact figures for your specific location then you can find some helpful tools online. These solar calculators take your specific location and give you the most optimum angles for each season.

To conclude the best solar panel direction is to be facing south (if you live in the northern hemisphere). The best fixed angle for solar panels tends to be anywhere from 30 to 45 degrees. If you get both of these factors right then your new solar system will generate energy quickly and efficiently. We hope you enjoyed this article and feel free to contact us if you have any questions!